Jaysus god alive, what a week. Now I’ve probably mentioned this before but gratitude is the antidote for almost everything that ails us. I’m grateful that this mess is breaking… 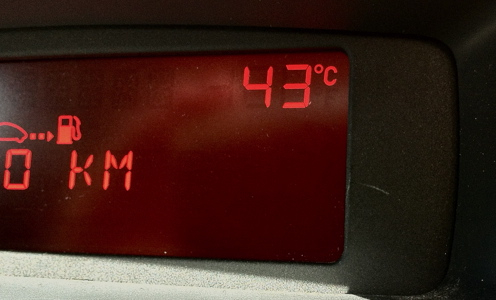 Today the forecasted high is only 27 degrees which will feel downright frosty after the heat wave we’ve been having over here. Hot enough to fry an egg on my arse, there’s a fun visual for you. At any rate, as the heat and humidity lift I need to bring a cool breeze of my own.

My mother tells me that everyone and their chien in my homeland are puzzled, even saddened by my decision to leave France. “I thought she loved it,” they say at the supermarket and hair salon (nice to know that I’m actually a topic of conversation in some parts of the world). Plus, I’ve gotten a bunch of emails asking me what went wrong. In one, feeling cheated by my defection was mentioned (Cynthia, you crack me up).

So let me go on the record. There’s nothing wrong with France (okay maybe the obsession with cheese and verb tenses is a little off). I love France (when it’s not hot enough to melt my face off). But bear in mind that it was never my dream to live in France per se. I just wanted to do something unexpected. I wanted to simplify my life and I wanted to live in a foreign country. I hope y’all see the irony in that.

Truth be told, I’d probably rather be butchering Italian than French but that’s not how it rolled out for us. For further information, refer to page 10 of the book and if you don’t have one, well, you know what I’ll say to that. Really, I would have gone anywhere in Europe that had an abundance of wine, an outdoor market and cobbled streets. What difference would it have made to someone trying to unwind from a busy life? France, Spain, Italy, Belgium, Croatia, Hungary, what’s the difference? I still would’ve had Neil to foot the bill, I still would’ve made a total jackass of myself at every turn and I probably still would’ve written about it. Who knows?

Not once in 44 years have I ever thought of living in Switzerland. I just happened to stumble upon a town that I loved. And, because of the decisions I made two years ago, I’m free to live wherever the hell I want. This adventure was never about France, not for a moment. It’s about having the freedom to do things I never had the time or courage to do before. It’s about having a life that I control instead of the other way around.

Anyhoo, back to gratitude. I’m thankful that fate led us to France and that everything turned out exactly as it did. If we hadn’t come to Semur we’d never have met our lovely friends Anne and Michel who introduced us to Vevey. So really, it’s all their fault. It’s no big deal, simply what’s next. Come October 1st we’ll roll over the border and see what happens.

Listen, France, really, it’s not you, it’s me. I just think I should see other countries for a while.

12 Responses to Clearing the Air