Jaysus god alive, I got one nerve left and I’m hoping it will hold as I once more thrust myself into the fray of Swiss apartment hunting. I’m back in Vevey despite not having planned to be. Last week came and went without a word from the apartment agencies despite their promises to let us know if we’d passed the test. Frustrated and a wee bit irritated, we loaded up the car with everything from Neil’s work computer to our ‘impress a real estate agent’ outfits. I’m telling you, it’s not easy.

But really, what else have I got to do? Hilary Clinton and Angela Merkel seem to have things in hand without me this week and Neil seems to be managing to keep me in a steady supply of food with minimal nagging, which means I’ve nothing but time at the moment. I’d say it’s a safe bet to not expect too many words from me this week. Instead, I’m all about the pictures. I realize it’s getting repetitive. I tell you what, when everyone starts sending me $100 a month, I’ll write whenever you tell me to, until then too bad suckers.

Check out Sarah, a former student of mine, at the highest point in Edinburgh, Scotland, Arthur’s Seat or as I call it, Arthur’s Arse… 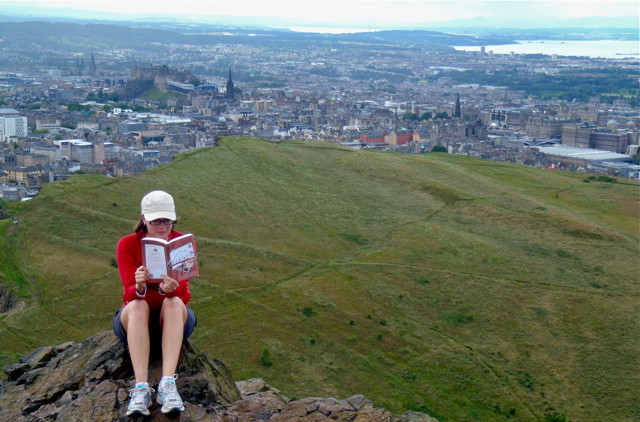 Sarah’s story is very cool. Not content to travel the common path, she is a young doctor who sees the world by doing locums, helping others while helping herself to a life of adventure. Of course, she learned everything she knows from me (more likely the other way around).

And here’s a shot taken in St. John’s featuring Jo, Dee and Paulette and an incredibly rare appearance by the Queen of Newfoundland and Labrador, Her Royal Highness, Joni, also known as me mudder (front, left with the purse strap around her knee). Apparently, just like Queen Elizabeth II, Mom needs to know where her handbag is at all times.

I’ve already been in the hands of a Duchess, now a Queen and next time I’ll have a shot of me with a King. If only all these royal connections could swing a Swiss palace for me. Wish me luck my loyal subjects, this princess is hanging by a gold thread.

6 Responses to Round Deux