Well, that little book I wrote is off being printed so I guess I can stop editing the manuscript. And, of course, already people are asking, “Any plans for a sequel?” Jaysus god alive, I’m not sure I’d have the energy and imagination to write another book. I may not even finish this post. But still, the word plans has an interesting ring to it.

I myself wonder what my plans are now that day and night blook business has come to an end. I do have the “tour” to think about. There’s the TV thing that I try my best not to think about and of course many tubs of sour cream to tear through once I land in Canada. Many friends to see, many szechuan dishes to devour at the Great Wall Restaurant in Halifax. I’ll stand by the sea in my hometown and swoon over the sound of my mother tongue. But then what? For those who think that I can rest on the proceeds from a goofy book, it would be wise to remember that even best-selling authors in my country usually have day jobs that pay the bills.

At some point I do have to think about making a living. But in the meantime, I’m more concerned about making a life. I have a bank account up at Crédit Agricole in town that has a tidy enough sum in it. Money that’s meant for emergencies or to finance a start-up if we need to flee the jurisdiction to avoid prosecution. It’s the proverbial rainy day fund that hasn’t been touched for over 18 months. And today I’m thinking about that money.

I just finished an interview that asked me to disclose my personal motto. I drew a blank. “Pee before you go” was all I could think of. Actually, what I really wanted to say was, “What kind of pretentious twit-twat has their own friggin’ motto?” So I asked a friend of mine who had just experienced the death of two people in her life and her response was “Carpe Diem.” Seize the day. It’s a good one isn’t it?

So here’s what I’m thinking. To hell with disaster cushioning. Sure, I have no income and the blook may fall flat on its lovely cover. And sure, at some point I do have to figure out my next step (to anyone who’s hiring—no job’s too wacky to be considered and I’m available for parties). But for now I’m planning to seize the account. I’m going to start trolling the French travel websites for every deal they have going. Last minute trip to Prague? Book it. Long weekend in Vienna, I’m in. Breakfast in Brussels, lunch in Lyon, supper in Spain. Coping in Copenhagen, Irrational in Ireland, The Bobbi of Seville, well, you get where I’m going with this.

Soon enough I’ll have to show up for work somewhere, so now is the time. The rainy day is here. Carpe Europe. 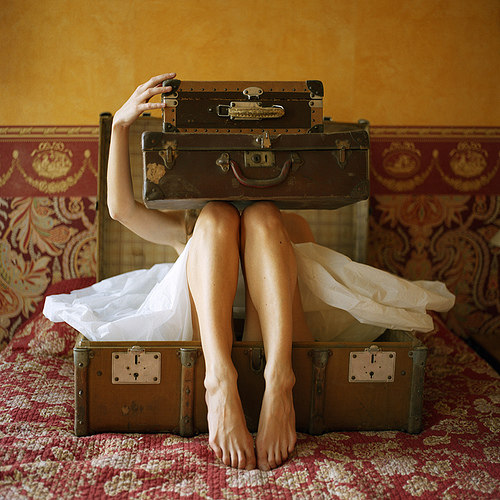